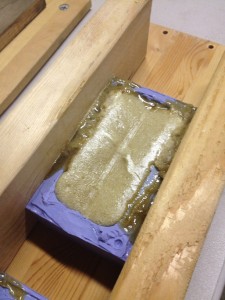 When was the last time you experimented with something?  Or tried something new that you haven’t done before?  I tend to be experimental by nature at least when it comes to cooking.  I’ll mix this with that to see what it tastes like, or try this recipe just because sometimes it turns out good like the chili I made recently wasn’t too bad, but sometimes it doesn’t taste or turn out quite like I expected like the pomegranate bars I made one time thinking that pomegranates are similar to citrus fruit so should be a problem right?  Not sure how something that is red turns out green when it’s baked, but ether way they didn’t taste bad but they looked horrible and non-appetizing for sure.

Well about two years ago I tried making an item for my brother in law that we thought would be a good selling item.  The design process was simple enough, I contacted someone who does 3-D printing threw the concept at him and we e-mailed back and forth until we thought we had a solution.  So instead of direct printing the item we decided to go with a silicon mold which I could use to make molded parts that would float (it was a pool item) sounds easy enough.  Then the fun began, I ordered some Styrofoam solution the type where you add type A to type B and pour it into the mold before it starts to expand.  Again sounds easy enough.

Well the mixture didn’t want to cooperate or I didn’t fully understand the concept, there were a lot of variables I didn’t consider, like temperature, humidity, the size of the mold, how well the solutions were mixed together etc.  But it was fun, I kept trying I even ordered a different solution that didn’t expand as much, e-mailed the designer back and forth kept asking questions, to no avail.  After many attempts I finally gave up, then one day while cleaning my garage I was collecting all of the miscellaneous failed parts (I put them in a box for future reference) and putting them away, I also picked up a piece of PVC pipe.

As I held the pipe in my hand I thought why couldn’t I cut this open and use this?  It’s almost the exact diameter needed, I could cut it in to smaller parts it would be easy and cheaper and way more efficient than pouring individual molds.  Well it worked, much to my surprise I can’t believe the solution was so simple…and right before my eyes!  We never sold the product (not yet) there wasn’t as big of a need for it as originally supposed.  But I learned a lot in the process and had fun experimenting.

So what about you?  When was the last time you exercised your creativity, explored new things, experimented with a new material or product or tool.  Whether it turns out right or you end up with a bunch of failed floaty things like me sometimes it’s the process not the product that matters.